It has started. Took about a few months but it has started. Initially, it was about Wenger ruining the club…now, it’s…STILL Wenger, but then you have every key decision-maker that has worked at Arsenal in the last decade, including Ivan Gazidis. What’s the fuss about? Well, earlier this week, Emery was candid about Arsenal’s transfer plans in January. All he really said was that the club would be looking into making just loan signings. Since, the internet has experienced a meltdown.

It’s funny. Tottenham went through the ENTIRE summer window without making a single signing and no one lost their mind. We’re all aware that the new stadium had a lot to do with that, but it was their decision to stay quiet nonetheless. What’s wrong if Arsenal choose to lay low and not spend in January? They did that in the summer, and everyone knows that it is a bloated squad present at the Emirates.

I’ve seen tweets and articles from folks that think they can run a football club much better than the guys already at Arsenal. Reasons given for Emery’s admission included the big contracts handed out to squad members (Welbeck, Elneny), Players running down their contacts (Ramsey), overpriced signings (Mustafi, Xhaka), and even the under-selling of good players (Szcznesy). Even the owner was slammed for not pumping money into the club. 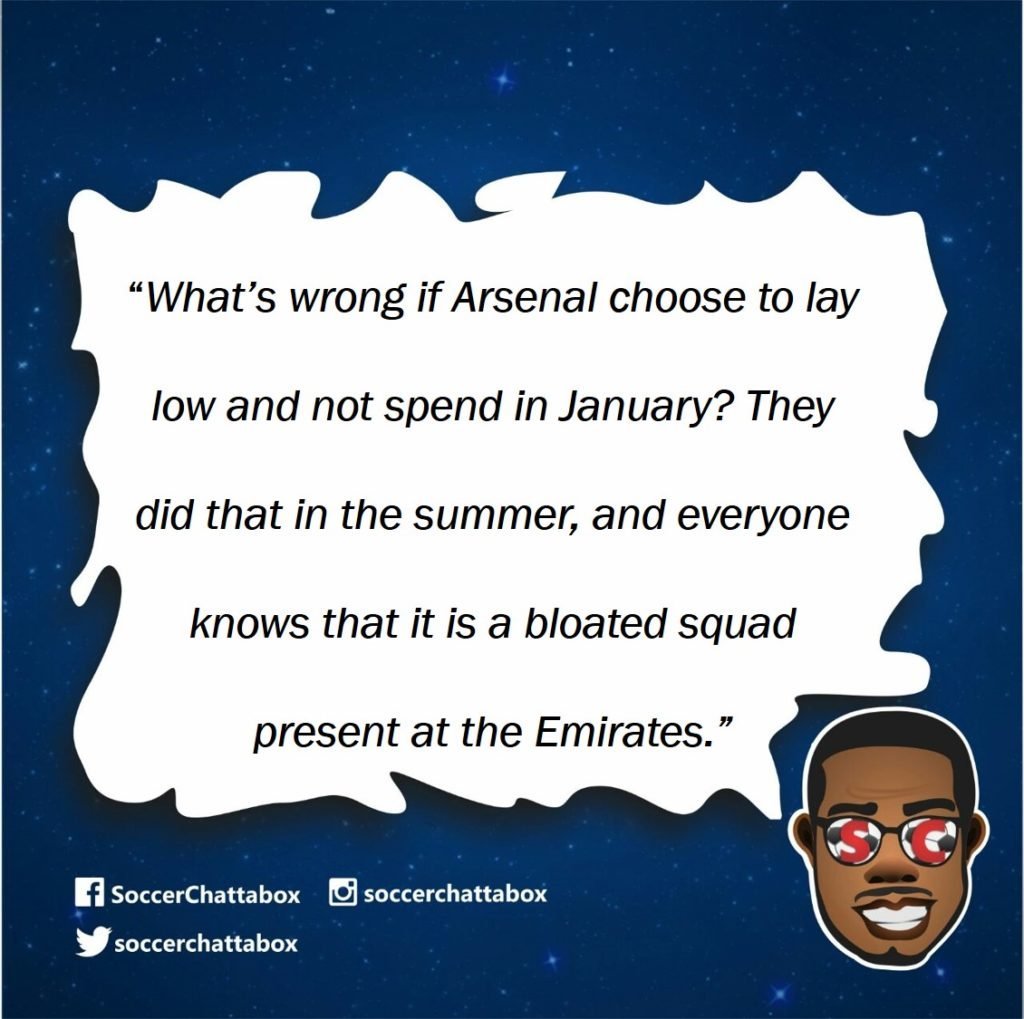 What’s the fuss about? There are actually good players in that squad. Emery is right to try and work with what he has. Every player deserved a fresh start and some players have responded superbly since he came (Iwobi, Xhaka, Lacazette). Injuries have not helped since they curtained the fine unbeaten run experienced earlier in the season. The likes of Welbeck and Holding will be devastated that they have missed out of the fresh start on offer.

The Ramsey saga will be discussed for some years to come. Personally, it hurts that he’s leaving but I felt the same for Wilshere, Walcott and even Giroud. Nevertheless, I’ve learned to accept the decision and move on. The club obviously knows what it’s doing. The lack of Champions’ League has had its effects but the club is always entitled to do what it feels is right.

A lot happened in the last year. Players have been moved on, while some others have been brought in. More will be moved on in the summer, which makes it good time for new major signings to come in. The young players at the club (Iwobi, Maitland-Niles, Reiss Nelson, Holding, Guendozi, Chambers, Nketiah, Saka) are highly-rated so this season is really about challenging them to push for the spaces that will be freed up by June/July.

I’m not even worried. The Wenger era will take time to be phased out, and it’s clear that there’s a plan for that. The future (maybe not the immediate one) seems good and fans should be positive about what’s to come. Wenger is gone, Gazidis is gone as well. Just yesterday, I read the injury list got shorter by a mile. What’s the fuss?

Arsenal Sign Pepe For £72 Million With £20Million As First Installment

‘Pepe Needs To Adjust To The Premier League’ – Wenger