Controversial actress, Tonto Dikeh reveals she is willing to sponsor the wedding and pay for the groom price of her next husband.

This was said after a troll said she’s ‘old and needs to get married.’

Tonto Dikeh posted a picture celebrating herself and the mistakes that have prepared her for her success.

”I’M THANKFUL FOR ALL MY MISTAKES/FAILURES. THEY ARE THE EVIDENCE THAT PROVES I TRIED. I’ve learned more from failure than I have success. It’s the training ground that’s preparing me for where I’m going. I no longer fear it. Instead, it gets me closer to the GOAL. Without it, I wouldn’t be the MAN I am today”

In response, a follower took to her comment section to say: “The beauty of a woman is her husband. No woman is complete without her husband go and marry, you are getting old.”

In response, Tonto said; “When I find another man I am wiling to pay his groom price and sponsor his wedding. I will”

See their exchange below; 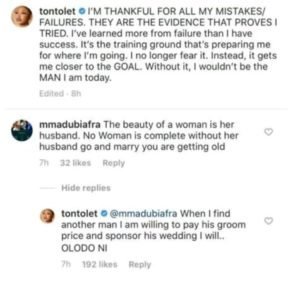 Nigeria has recorded an additional two deaths in the last 24 hours to COVID-19. This was revealed by the latest