I’ve had time to think about this…too long a time actually. The biggest story of this transfer season is undoubtedly C. Ronaldo’s move to Juventus. Many will argue that he was only signed so that he won’t have to be scoring against them anymore (lol). Juventus realized his value quite early so they pulled out all the stops to get him in…I mean…just look at that fat salary he’ll be earning…shiiid. Since that deal took shape, speculation has been rife about who Madrid signs to replace him. The biggest name on that list? Eden Hazard.

After a fine World Cup campaign, the Belgian could add another feather to his illustrious cap. Moving to Real Madrid would be a major step-up in his career. But then, it is a step he really has to take. Look at his career so far. Once he achieved star status in France by winning the Ligue 1 with Lille, moving to Chelsea seemed the necessary next step. In his time at Stamford Bridge, he’s shown his ability time and time again. There’s no doubt that he has adapted well to a bigger stage. Moving to Madrid should be just as seamless.

Moving to Real Madrid represents a new challenge for Hazard. He has won 2 Premier League titles and a few other domestic trophies at Chelsea and, to be frank, I don’t think he’ll be motivated to go after those same trophies again (unless you wanna amuse me by saying Chelsea will give him a Champions League trophy…lol…please don’t tell me). Other than European glory, I don’t think Hazard has anything left to achieve at Chelsea. By the way, any player looking for European glory knows better than to turn down Real Madrid…I mean…you have like a 4/5 (see what I did there?) chance in winning that trophy there. 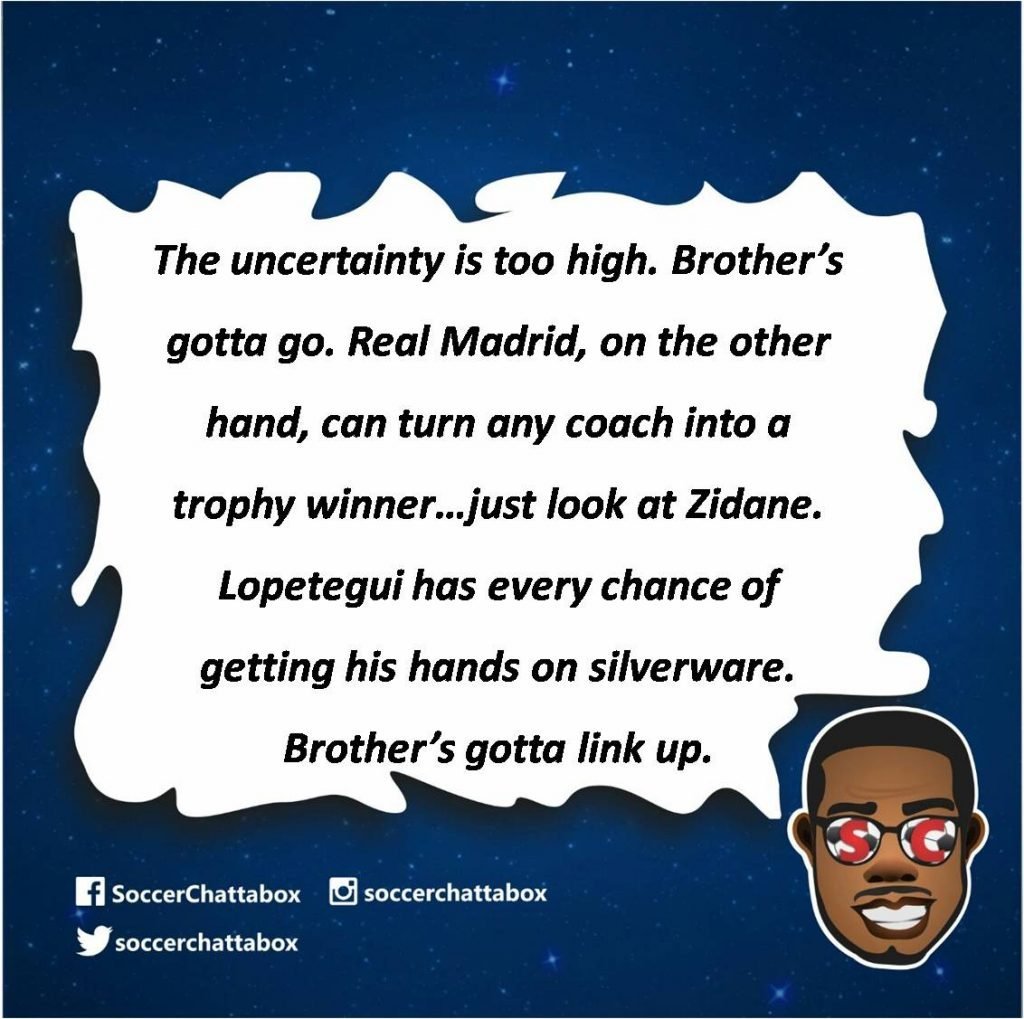 At 27, Hazard has hit his prime. He’s fitter than ever, quicker & sharper than ever, smarter than ever…hell, he’s even more handsome than ever (even though that’s highly irrelevant). What better place to spend your prime years than Real Madrid? Ronaldo gave 9 prime years to Real Madrid, and look where that got him. He’s a legend regardless of what happens at Juventus. The likes of Zidane, Figo, and Roberto Carlos all gave their prime years to the club. Now you can’t talk about Real Madrid without mentioning their names. Hazard has the chance to be in that same frame.

Times have changed. Chelsea have a new manager (again). Hazard has played under 5 managers at the club. Sarri could be the sixth. Difference here is that the last 5 guys were bonafide trophy winners. Sarri doesn’t have that reputation. The uncertainty is too high. Brother’s gotta go. Real Madrid, on the other hand, can turn any coach into a trophy winner…just look at Zidane. Lopetegui has every chance of getting his hands on silverware. Brother’s gotta link up.

Finally, the chance to take over the iconic number 7 shirt is too good to pass up. Taking over CR7 is already impossible (you’d have to be on steroids to break his records) but that should not stop Hazard from taking up that spot in the team. He has the star power…I mean…if Bale could earn star-status at Real Madrid, so can Hazard. Don’t get me wrong…Hazard is not going to score or look to score in every game. Benzema will definitely not be looking to be his provider (hell, if anything, Hazard should be the new Benzema) but he will have an impact (or I expect that he will).