Even with AC Milan leading the game, you always had the sense that Juventus could never lose such a game at home. Once Kean slotted home the winner, everything felt normal again. Juventus are now just one win away from winning the Serie A (again), making it 7 in a row. They have been Italy’s best team by a mile for so long…and it looks like they’ll be doing that for quite a while.

It’s crazy that a single team can dominate the Italian Serie A. Incredibly crazy. This is the Serie A we’re talking about; regarded as one of Europe’s grandest leagues…and one team is treating it the way Lyon treated the French Ligue 1 a few years back. Juventus have shown several times that they OWN this division, and for good reasons like:

HAVING THE BEST PLAYERS: They always do. Just like Bayern Munich in Germany, they usually target the best players in the division. The best players from rivals like Napoli, AS Roma and the 2 Milan Clubs are always plucked to move to Turin every year. Over the years, Juventus have attracted the likes of Pjanic (AS Roma), Higuain (Napoli) and even Bonucci (who left to AC Milan before running back after realizing his mistake). If the top players at rival clubs are not as good as the ones at their disposal, they can always go outside the league (hey Cristiano Ronaldo).

QUALITY MANAGERS: The importance of a good manager cannot be overemphasized in football. Finding one that can deliver on a consistent basis is a tough task. Conte proved to be a huge success in his time at the club. When he moved on to manage the Italian national team, the club took a smart decision by appointing the last manager to win the Serie A title; Massimilano Allegri. Allegri has done an outstanding job since; even making the Champions League final in 2015.

CONSISTENCY: The squad usually remains the same over time; with little changes made yearly. The core of Chiellini, Buffon, Pirlo, Mandzukic, Pogba, and Vidal were part of the squad for the best part of a decade. Like Man United under Ferguson, the core of the team was hardly tampered. If there needed to be a change, quality was replaced with quality. Pirlo was replaced by Pjanic, Buffon was replaced by Szczesny, Vidal was replaced with Khedira. Quality is replaced with Quality. 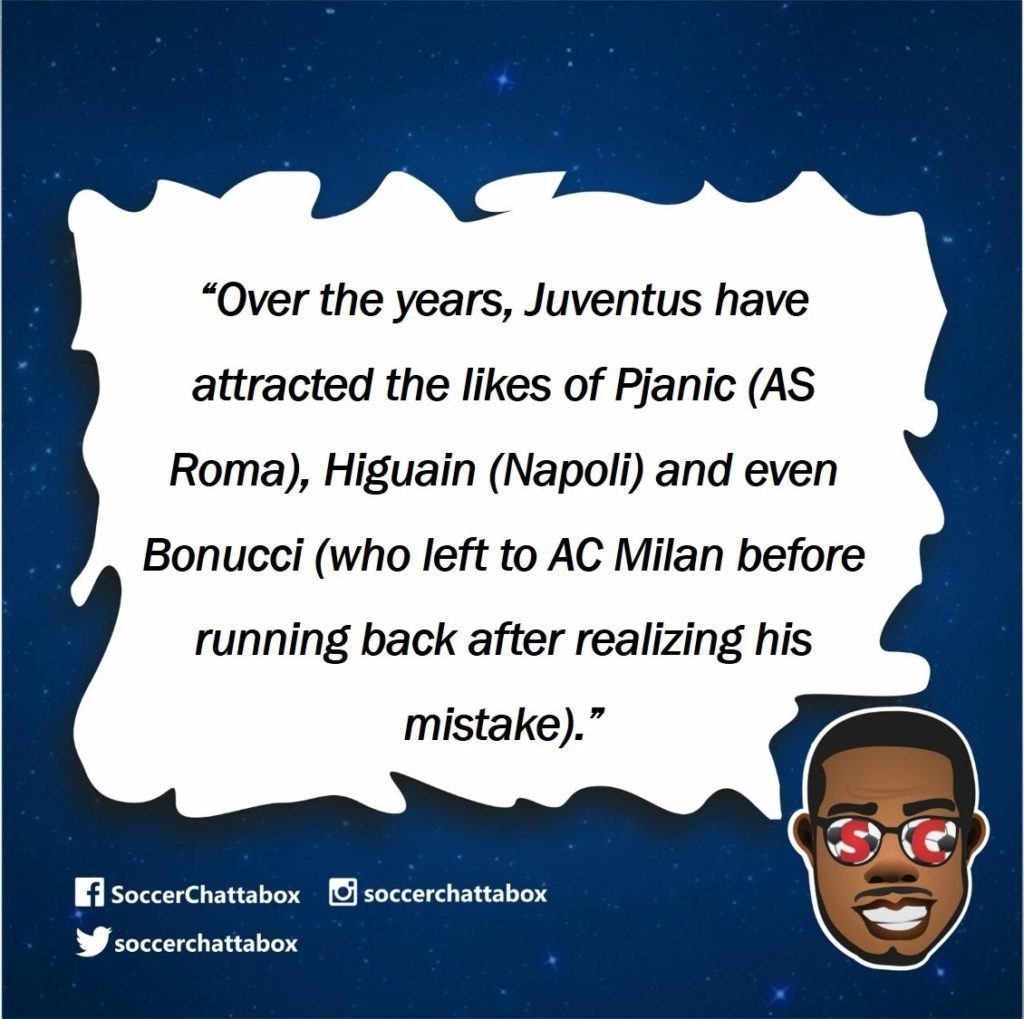 The likes of AS Roma, Napoli, AC Milan and Inter Milan have been playing catch-up for too long. They don’t have the players to compete. The turn-over of managers at those clubs is ridiculous, and players move in and out of those clubs at an alarming rate. Only AS Roma and Napoli have shown some stability in the last 5 years. In my opinion, Mochi’s depature from AS Roma (after serving as the club’s Director of Football) was a big mistake. Hiring him was a masterstroke. Losing faith in him so early was tragically dumb.

To topple Juventus will require a club to be strategic in its dealings. Quality players have to be bought and developed in equal measure. Good managers have to be trusted and given time to succeed. If those rival clubs apply what is going on at Tottenham or what was done at Atletico Madrid, they will stand a chance…but not right away…and that’s why Juventus will remain on top for the time being.

6 Most Expensive Nigerian Players in Europe