Ayodeji Ibrahim Balogun also known as Wizkid has once again shown that he is in his class of his own as he is set to perform at the Oh My Festival Music Festival 2019 in Amsterdam. The super star stole all the headlines last year for selling out the O2, London, UK – a feat fellow singer, Davido repeated, although recent rumours suggest that it might not be true.

Wizkid conquered the Nigerian scene when he held a sold out concert at the O2 and ended up winning the hearts of many Nigerians in the process. What was most exciting about the feat was that the concert held on the night that the UEFA Champions league final was played. To achieve that in a country with so much love for football is by no means a joke.

This time Star Boy takes it all the way to Amsterdam for the Amsterdam Urban Music Pop Festival to be held on the 29th of June, 2019 at the Arena Park, Amsterdam. This was announced via the official Instagram handle @ohmymusicfest. 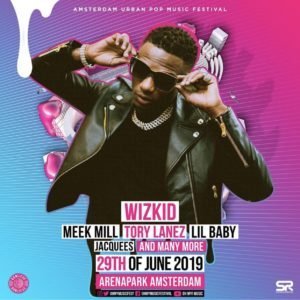 “OH MY…..Y’all thought we’re done dropping names? We are very pleased to share with you the one and only Starboy also known as Wizkid, will be performing at OH MY! Music Festival – June 29th in Amsterdam! We will release the complete OH MY! Music Festival line up soon. More is coming so stay tuned!”.

Other performers at the show include: Meek Mill, Tory Lanez, Lil Baby, Jacquees among others.

This comes as no surprise for many Nigerians as Star Boy is known to push barriers and place Nigerian music on the world map. Worthy of note is that the show is already sold out.

Also, the singer after this show will be performing at the Ends Festival taking place at the Croydon’s Lloyd Park and holding between the 31st of May and 2nd of June 2019.

Davido’s reaction to investment made by boy he gave N1m