Nigerian comedian, Basketmouth reacted to the xenophobic attacks in South Africa. Also in solidarity with Nigerians attacked, he has canceled his appearance at the upcoming Comic Choice Awards in South Africa.

“I am not sure how and when we got here. I won’t be attending the Comics Choice Awards this weekend in S.A as scheduled. It might sound like a whisper but together our voices and the right actions will hopefully make a true difference and real change can begin. But for today, we stand,” he wrote on his Instagram page. 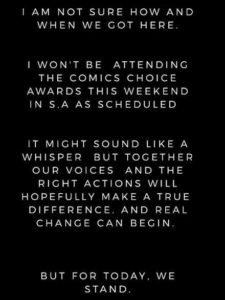 In other news, Nigerian singer, Tiwa Savage also cancelled her upcoming appearance at the 2-day DSTV delicious Festival set to hold on September 21 in Johannesburg. She made this announcement via Twitter.

‘How My Son Died And Came Back to Life’ – Actress, Angela Okorie