BBN Star, Khloe also known as Koko cursed a troll who claimed the reason for her restlessness is because she smokes weed.

The fashion entrepreneur and model took to her Instagram to ask followers why she wakes up feeling restless and angry.

“Hello people. Am I the only one that just wake up some days Restless and Angry ?

“If not , pls can anyone explain the reasons and how to feel better.”

A follower commented saying she feels that way because she smokes weed. Koko replied that there’s a difference between nicotine and weed and she doesn’t smoke weed.

The follower then mocked Khloe for smoking nicotine, “no wonder you and Teddy A have not blown.” he said.

In response, Koko cursed him in Yoruba. “Your life shall be ruined. You shall die this year.” 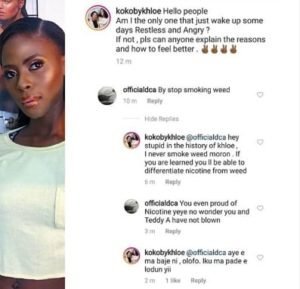 OAP, Dotun Says He Got a Death Threat for Accepting to Interview Tacha

Nina Slams Troll Who Called Her Husband A ‘Spiritual Husband’