—Zlatan has been released from EFCC custody, his friends debunk rumours that Davido helped him out.

Reports reached us that Zlatan and others arrested except Naira Marley have been released after spending 5 days at the EFCC custody.

Naira Marley allegedly has incriminating evidence on his laptop which hindered his release.

Meanwhile, when Zlatan was released, rumors filled the internet that it was Davido who hired a SAN that helped him.

Zlatan’s friends including Aremo Gucci immediately debunked these rumours stating that Davido didn’t help Zlatan and people shouldn’t spread a story they don’t know. He revealed that Olamide and Burna Boy were the artists who showed support.

“Olamide and Burna Boy, na dis people show love when we needed them. Make anybody no go dey bobo una on top ground say na one person collect lawyer. If you no know story, you no know.” Aremo Gucci said in a video he uploaded on Instagram.

Another friend with the name ebaycarter on Instagram also revealed that only 3 artists supported Zlatan and Naira Marley beyond the Keypads and Davido isn’t one of them. 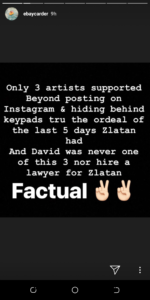