After his eviction yesterday, Gedoni revealed that contrary to the assumptions, he and Khafi never had s-x in the house despite videos that looked like they did.

When someone asked him who he missed most, he replied Khafi. However, a Twitter user said it is a lie as she accused him of using Khafi in the house. She also blamed him for being responsible for Khafi’s troubles at her place of work.

Gedoni immediately replied that he was shocked when he heard Khafi risks loosing her job as she’s celibate and both of them never had s-x.

He insisted that it’s a misunderstanding and he understands that it’s a price to pay for fame but he and Khafi doesn’t deserve the allegations and treatment.

See His Tweets Below: 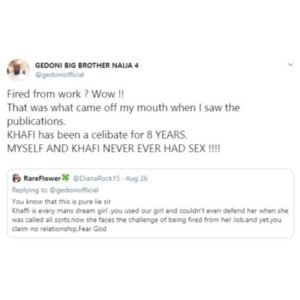 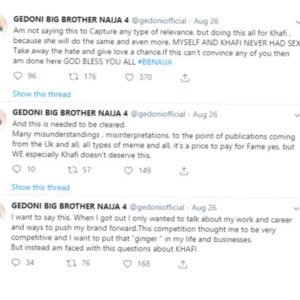 Man Shares Heartbreaking Response He Received After “Shooting His Shot”