Ghanaian actress, Joselyn Dumas has a word for people who judge a woman’s character by her marital status.

“Being married is not a reward for a great character and being single is not punishment for bad character,” she wrote.

“There’s a lot of women with real questionable characters but have amazing marriages and there are a lot of amazing single women out there searching and waiting on God. Stop measuring a Woman attitude with her marital status”, she added. 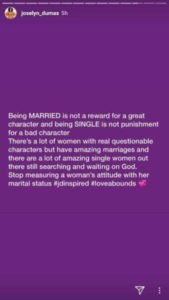 Vector Agrees To A ‘Rap Battle’ Against MI Abaga For N40million