Augustine Miles Kelechi popularly known as Tekno or Alhaji Tekno is a Nigerian singer, songwriter, music producer and dancer. Known for his Afrobeat, Hip-hop and R&B genre, Tekno is regarded as one of the highly rated Nigerian musicians, with several musical productions.

Born April 17, 1992 in Bauchi state into a family of six – five boys and one girl. Tekno hails from Ebonyi state but he has been raised in several parts of the country including Nassarawa, Kaduna and Abuja due to the fact that his father was a member of the Nigerian Army. He had his primary and secondary education in the Northern part of the country. His love for music started at a young age. At age 8, Tekno was enrolled in music school where he learnt and mastered the rudiments of playing piano and guitar. He is the elder brother to “Starboy” label act Spotless.

Tekno was first signed to K-Money Entertainment under which he released his first single “Holiday“. With featured vocals from Davido, “Holiday” was positively accepted and gained massive airplay.
In 2012, he caught the attention of renowned comedian, Julius Agwu with the performance of  a song titled Onye Ne Kwu at an event in Abuja. At the same event in Abuja, he met Iyanya and Ubi Franklyn, the manager of Made Men Music Group record label who prompted his relocation to Lagos to intensify the pursuit of his music career.

On October 5, 2013, he signed a recording contract with Made Men Music Group, under which he released singles like “Dance” and “Anything“. These singles won him a nomination in the “Best New act of the Year” category at the 2014 Nigeria Entertainment Awards.

The following year, Tekno’s hit single “Duro” was a major breakthrough as it was positively received worldwide. A remix which featured Phyno and Flavour N’abania was released on November 16, 2015. It topped several charts in Nigeria and on the international scene, it peaked at #5 on Capital XTRA’s “Afrobeats Chart: Top 10” for September 2015. He dropped another smash hit “Wash” in November same year. The song was produced by DJ Coublon with the video directed by AJE Filmworks. While Tekno’s singles have been critically acclaimed, he has missed out opportunities to win prestigious international awards for not having a complete album. This led to the release of his first album “Basstards” on September 21, 2016. He has released three songs after that- GO (2016), Pana (2017) and Jogodo (2018).

In November 2018, the hip-hop singer disclosed that he had health challenges. He further stated that he won’t be able to sing or engage in any performance.

In 2019, Tekno left Made Men Music Group after the expiration of his 5-year contract. The award-winning artiste was featured on Beyonce’s Lion King inspired album- The Lion king: The Gift. 2019 was indeed a great year for him as he gained more recognition internationally.

On April 3, 2020, Tekno released a new single titled “Kata”. The song is centered on love and romantic promises. The song serves to remind people of the beautiful things of life like love, joy, friendship, bonds, and hope. The upbeat track is currently the No. 1 trending song on Triller, an entertainment and social video sharing platform, with over 850+ videos already created two days before its official release.

Tekno Miles is credited as the songwriter of most of Davido’s new songs including his latest song titled If. He wrote and produced several others including, Catch You by Flavour; Panya by Brackets; Last Station featuring Stonebwoy; Pray For You featuring Lynxxx; Boss by Ice Prince, and Show by Victoria Kimani. Miles is also linked to the song Bum Bum by Diamond Platnumz featuring Iyanya. Tekno Miles music and dance moves are inspired by American musician, Chris Brown. This pretty much helped him win the admiration of mostly young fans. The “Duro” crooner is rated one of the most talented and outstanding singer in the Nigerian music industry.

Tekno is in a long time relationship with girlfriend and baby mama, Rachel Akosua Garton. She is a Nigerian-born singer and dancer of Ghanaian and British descent. They welcomed a child in 2018. 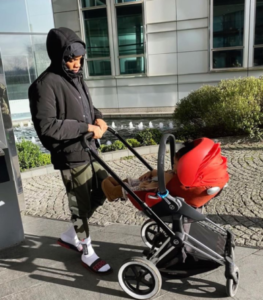 He was nominated for Best New Act of The Year at the 2014 Nigeria Entertainment Awards.

In 2015, he won awards for the Best Pop Extra Video at the Nigeria Music Video Awards

He was nominated for Best International Act Africa at BET Award 2017.

According to Forbes, Alhaji Tekno is worth $2.5 million dollars.

Davido Seen In Beautiful Video Singing With Kids On The Street