Nigerian media personality, Toke Makinwa maintains her stance that China needs to be fined over the Coronavirus pandemic.

In her new tweet, the actress stated that china started the virus and are now “profiting from it.”

This is coming after she wrote that she is mad at China and the country should be fined.

She had tweeted; “Not to even lie I am low key mad at china, the whole world should fine them when all of this is over, the whole world is paying dearly for it. Stop eating certain animals.”

Her tweet was met with support and criticism. In response to the criticism, she wrote;

“Who started it? Who contained it? Who is now profiting from it??? When I said the world should fine China I was called insensitive, nations should wake up and fix their economy, build factories, empower your people so we all don’t depend on their economy. Happy quarantine.” 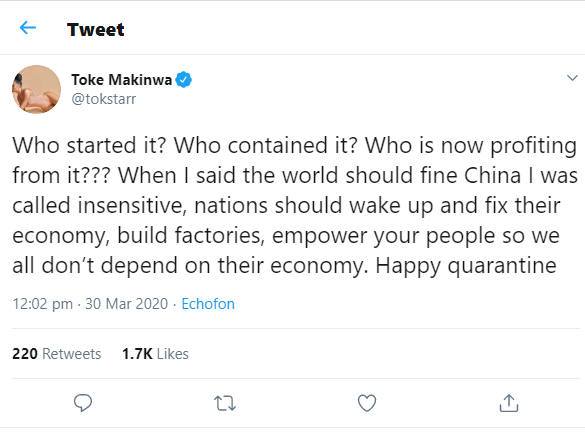 Cosmetic Surgery: Who Are You To Tell People What To Do With Their Bodies? – Toke Makinwa