Nigerian singer, Davido and his girlfriend, Chioma Rowland who is rumoured to be pregnant, had their introduction ceremony recently.

The ‘assurance‘ crooner took to his Instagram page to share a photo from the introduction ceremony with family and friends in attendance.

”First of all Introduction,” he captioned the photo.

On his Insta story, the singer hinted that the wedding ceremony will hold by 2020. “Get your trads ready. #Chivido2020″ he wrote. 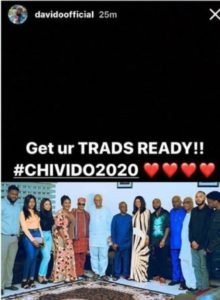 Also, Davido’s elder brother, Adewale Adeleke confirmed the news as he took to Instagram to congratulate the couple. He also used the hashtag, #Chivido2020.

”So happy! Love you both @thechefchi @davido official #chivido2020” he wrote

Many fans and well wishers have reacted to this news, see some below;

Davido and Chioma are getting married, it’s official. This wedding go madddddddddddd ????? pic.twitter.com/RJezfIvIhu

It’s official, Davido is getting Married to Chioma by 2020 #Chivido2020

Igbo girls are rare gem, they are unique and have diverse characteristics and traits. You can be sure you are marrying a girl that has added value when it comes to cooking.

Congratulations to @iam_Davido and Chioma. We can’t wait for the 2020 Wedding ? Wedding of the Year pic.twitter.com/WECC2Kaic7

Couple Who Went Viral For Their ‘No Reception’ Decision Speaks Up

Woman Shocked To Discover Her Boyfriend of Two Years Just Got Married, He Explains Why