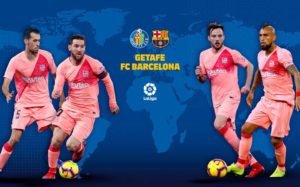 Pre-match talks had it that a win here for Barcelona would make it five consecutive league wins for the Catalan Giants. Equally important for stat mongers was that Messi netting the first goal here would mean the Argentine has netted the first goal in the Liga for four straight years. Oh well! All went according to plan. iDONSABI gives you a virtual experience of the events at the Coliseum Alfonso Perez.

It was the hosts however who had the first real chance. Jaime Mata had found the back of Ter Stegen’s net. The atmosphere at the Coliseum Alfonso Perez was electric. They had had the first goal in 2019. But their celebrations were suddenly put to a halt when match officials had faulted the goal following an infringement in its build-up.

Messi then took the ball to the hosts when a trademark moment of brilliance from the Argentine kept the Catalans in front under just 20minutes of action. Barca’s no.9 then made it two just inside of 39 minutes. A sublime effort from the Uruguayan was all that was needed for a comfortable lead by the Catalan giants. On receiving the ball, there was still a lot for Suarez to do. He fired a fine volley home. There’s no way Getafe’s goal keeper, David Soria was keeping that one out.

Few minutes later, Getafe nearly carved out a response when the ball was deflected off Arturo Vidal following a cross inside the box. Ter Stergen didn’t stay happy for so long however as Mata cut the two goal margin within one. Half-time soon came about. Game set!

After the half-hour mark, several chances surfaced with no goals in between the sticks. For all the craft and physicality, Getafe were just no match for the LaLiga leaders. They were seemingly outclassed and outnumbered in every department on the field of play. It may suffice to say that the Metropolitan club had their fair share of chances but it was  Mata who lacked a bit of the cutting edge in the final third.

In the other half, Soria was called into action as a low shot from Messi was saved by the shot stopper fifteen minutes from the final whistle. In the final minutes Soria had to stop Messi from poking a ball through on goal for the umpteenth time. 1-2 it was.

Mata Urges Footballers To Commit More Into Fight Against COVID-19