Beauty entrepreneur, Ifu Ennada has opened up about considering having kids the unconventional way after Uriel shared her thoughts on the subject on Instagram.

Uriel Oputa revealed that she has considered having kids the unconventional way because she wants to give her child a chance to bond with her mother before her mother’s dementia worsen.

In response to Uriel, Ifu Ennada revealed she has also considered the same.

“UU, I’ve learnt to stop living my life for people – what they’ll say, how they’ll feel, etc because at the end of the day, my life is governed by God and not mere mortals whom sometimes have the most selfish, afflicted and evil minds. I personally have thought about having kids the unconventional way because I’m not ready to let anyone come in and hurt me or try to ruin my life again.

“What I’m saying is, pls do you while everything is right. I pray for your mum that God will heal her and give her a longer life, but no one knows tomorrow, so pls do you. If you wanna have a child or not, let it be totally your decision – one that’s not influenced by the societal norms. God who created us understands… Love you Uriel” 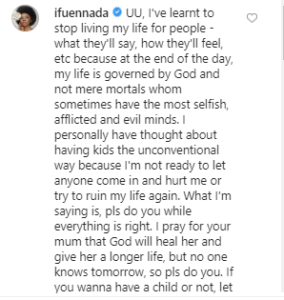 Nigerians React As Ex BBNaija Housemates, Bisola and Tobi Shade Each Other