— Tonto Dikeh and IK Ogbonna’s feud continue to intensify as they dragged each other on Instagram.

— While Tonto insinuated IK is gay, IK fired back and called her a dog.

Tonto Dikeh and IK Ogbonna may not be ending their feud soon as they continue to attack each other on Instagram.

Earlier, Tonto Dikeh called out Annie, 2Face, IK Ogbonna and Co. She revealed she has a new man and doesn’t want them to come near him to ‘beg‘ for money.

Juliet Ibrahim and IK Ogbonna reacted to this statement. While Juliet indirectly shaded her stating that she’s looking for attention, IK called her a dog.

Tonto Dikeh in a post replied him asking is his ass has stopped licking insinuating he is gay. 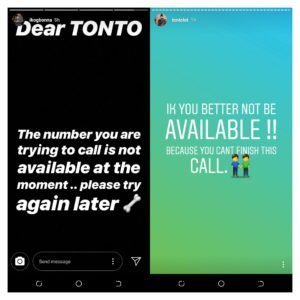 ‘You Can Divorce Your Spouse, Not Your Senses’ – Reno Omokri