Nigerian lady identified as Nkechi Okechukwu has narrated an amazing story of how she gave birth inside Lagos traffic yesterday morning.

Nkechi who delivered her baby safely revealed that she started having contractions as early as 6:30am and around 6:50am, they were already in a taxi on their way to Eko Hospital, Ikeja from Ogba.

However, the traffic was so bad and after about an hour, still in traffic, her water broke. They (her husband and driver) started looking for a close hospital around the area they were stuck in and before she knew, she could feel her baby close. They also tried calling a doctor to guide them on what to do but the baby’s head was already out, some minutes later, the baby was completely out.

They eventually found a health center around the area and the staff took care of the rest. Nkechi delivered a boy and the excited mother via her Instagram page shared his birth story and his names -Jaron Ikechukwu Wonderful.

Read Her Full Story Below: 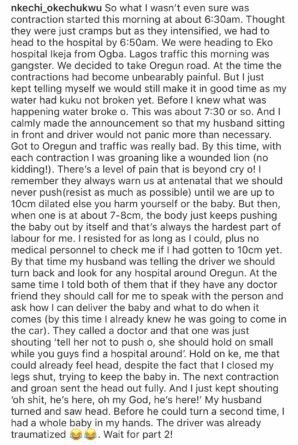 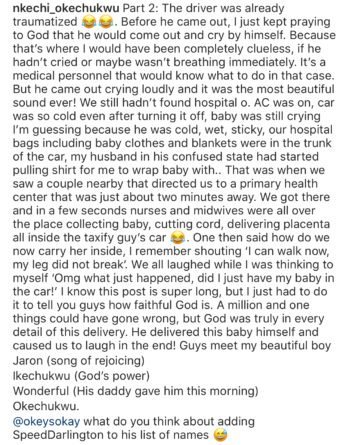 Angela Okorie Weeps, Speaks On How Life Has Been Tough For Her (Video)

Mo’Nique Calls Out Oprah Winfrey, Accuses Her Of Making Her ”Life Harder”