A Nigerian lady who identified herself as Vick has cried out in video that has gone viral on social media following the challenges she’s been facing after a botched breast surgery controversial Nigerian “plastic surgeon”, Dr Anu Fella allegedly performed on her. 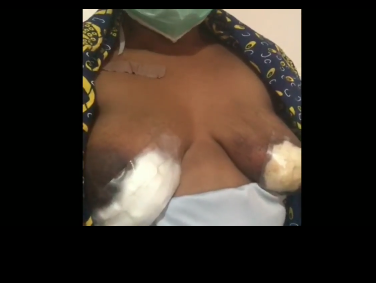 Vick said she paid N1.6 million for the surgery and  suffered complications shortly after the operation.

She said she started seeing “reddish sign” on her left breast and when she complained, she was placed on an injection which continued for 4 weeks.

However, she was diagnosed with having abscess in both of her breasts. It was drained off but it kept reoccurring. Vick complained that she’s spent all she had on the surgical process. She also revealed she is currently at the Lagos University Teaching Hospital (LUTH) where doctors will drain off the abscess in her breasts.

This isn’t the first time someone would call out Dr. Anu over complications after surgery with her. Recently, popular Twitter user, Omohtee called out the doctor after she made her waist thinner than she requested.

Khafi Calls For Prayers For Her Family Following Her Brother’s Murder In The U.K (Video)

Skull Breaker Challenge: Doctors Warn It Could Kill, Many Get Injured