The National Chairman of the All Progressives Congress (APC), Comrade Adams Oshiomole has hinted that the South-South geopolitical zone may likely produce the next deputy Senate president.

Media aide to Comrade Adams Oshiomhole, Mr. Simon Egbebulem  affirmed yesterday that APC leadership is backing Senator Ahmed Lawan as the Senate president and Honourable Femi Gbajabiamila as the speaker of the House of Representatives.

Oshiomole cleared the air on the other NASS positions. He said from deputy senate president to chief whip positions, were yet to be zoned.

Oshiomhole, however, hinted that the next deputy senate president may likely emerge from the South-South region.

It should be recalled that reports emanating from media suggested that APC had already zoned the deputy senate president position to the South South as a result of Oshiomole being from that region.

Reports also singled out Senator Francis Alimekhena, who will be representing Edo North Senatorial District in the 9th Assembly to be the leading candidate from the South-South being considered for the deputy senate president.

Also Read: ‘I Donated My Salaries for 8 Years as Governor’ – Aregbesola

However, Oshiomole has labeled the allegations as untrue.
Oshiomohole said: “Nothing like that has been done. Nobody has said this is the person for that position. But the party is working on how to share the position so that every part of the country will have a sense of belonging.

“They have started the process and the party is backing Femi Gbajabiamila and Ahmed Lawan for the position of Speaker and Senate president respectively but for other positions, the party is still working to sort out these offices,” he said.

When questioned about the reports that the South-South was being considered for the deputy Senate presidency, the media aide answered assertively,  but stressed that the final decision lies with the party. 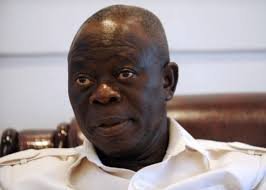