A landlord writes a heartwarming letter to his tenant informing them that he’s waiving their December rent so they could have a good Christmas.

In the letter, the kind landlord wrote that he understands they’ve had troubles with jobs for the past months hence his decision to relieve them of December’s rent.

“I know you guys have been having trouble being between jobs these past few months and I just wanted to thank you for always coming on the rent. So my gift for you and yours is that I’m waiving your December rent so you can give your family a good and decent Christmas this year. We will just pick it back up in January.” 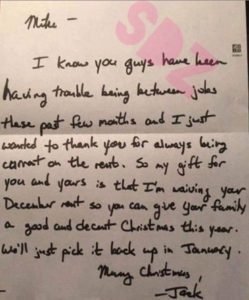 Bouncer Beats Up Stripper For Demanding Her Pay In Benin, Edo State (Video)

Fuel Scarcity: Fair or Not ?