Uti Nwachukwu blasted people who criticized his statement that Cee-C is the most successful BBNaija 2018 housemates.

People including BBN stars, Princess and Ifuennada reacted to this opinion and expressed that he was wrong to compare.

“The definition of success is relative..until I give Uti 5 million Naira now come sign am as my first brand Ambassador e no go know say me sef I successful. Lol’ Ifuennada wrote

‘Witchcraft is being uncomfortable and pained by another person’s growth.’ He wrote.

“Witches (female and male) walk amongst us like regular people…You can spot them by identifying this trait. BEWARE and FLEE.” 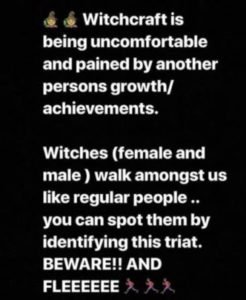 TV Personality, Yvonne Nwosu Advises Others As She Quits Smoking

“I Will Make Tacha The Biggest Brand Out Of Africa” – Teebillz

BBNaija: Ike and Mercy Emerge as Head of House For The First Time