Nigerian musician, Seun Kuti has called out people outraged by the Okada Ban in Lagos state. According to him, there are oppressors in waiting and care not about the riders.

The Government of Lagos state recently banned Okada and Keke Napep in several areas in Lagos. This has caused lots of outrage as many have accused the Government for being insensitive, snatching jobs from hundreds of people.

Others have complained about how hard it is to get to work. Many people took to Twitter yesterday to share the struggles they faced to get to work as the buses the Government promised would replace the motorcycles were not available.

In reaction to this, Seun Kuti has accused Nigerians of being selfish claiming they only care about the services of the Okada riders but not the riders.

“Nigerian professionals have shown their true colors again as largely oppressors in waiting. Children dying in hospital everyday they don’t care. Miseducated and undereducated children they don’t care. Police brutality, no outrage but tell them to walk from bus stop to the office oh no the worst has happened!!!

“If u wish for your children or loved ones to be okada and keke riders please raise up your hand! We know these ain’t jobs. We pacify those we have failed with slave labor and slave wages and we are ready to fight for them to continue slaving away!!” 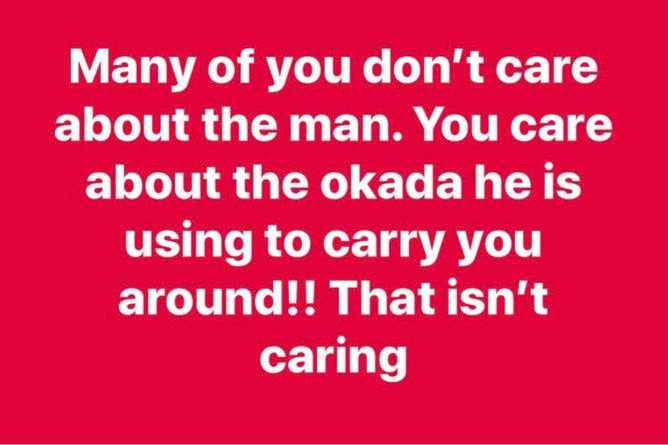 Angela Okorie Weeps, Speaks On How Life Has Been Tough For Her (Video)

“If I Cheat, You Have To Forgive Me But If You Cheat, The Marriage Is Over” – Nigerian Man Warns Future Wife