The La Liga is Spanish top flight football league. It is the Spanish equivalent of the English Premier League or the French Ligue 1. At the moment the best players in the world (Messi and C.Ronaldo) play in this league. And this league has also won the highest number of European trophies. The fact remains though that the Spanish La Liga is not as competitive as the English Premiership. Some sharpshooters have made the La Liga what it is today; let’s go meet some of them.

So on Wednesday, Messi joined the Club 100 UEFA goals. This was after hitting a brace in Barcelona’s 3 – 0 win over Chelsea at Camp Nou. Lionel Messi is arguably the G.O.A.T (greatest of all time) as far as football is concerned. The only group who will argue against this are C. Ronaldo’s fans. Whether he’s the greatest of all time or not, everyone will agree that this Argentine forward is one of the best footballers the world has ever seen. He was magical in his performance against Chelsea. Welcoming his newborn son into the world with the scoring of his fastest career goal ever, in 2 minutes 8 seconds. Messi has played for Barcelona all his professional football life. He joined Barcelona in 2004 and hasn’t gone anywhere since then. 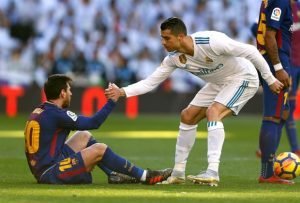 For both country and club, C.Ronaldo has always found a way to deliver his team even whenever needed. And that is why he has been called an alien, amongst other things. As far as football is concerned, C. Ronaldo is arguably the G.O.A.T (Greatest of all time). Even his arch-rival Messi has attested to this fact at least on one occasion. The only group who will argue against this are Lionel Messi’s fans. One thing is sure though, he’s a goal machine and the world has not seen his like before.  He started the Club 100 UEFA goals, when he hit 100 goals some time ago, being the first player in the world to achieve this feat. This Portuguese forward started playing in Lisbon until in 2003 when Sir Alex Ferguson saw him during a Champions League match. Lisbon lost to Manchester 3 – 1, but young C.Ronaldo was very impressive in that match. Ronaldo Joined Real Madrid in 2009 and there he has made and created records.

Zarra was a Spanish footballer who spent the majority of his football time in Athletico Bilbao. He started his senior career in Erandio, in his first season in the senior team, he’ll score 12 goals. Then for the next 15 years, he’ll play in Athletico Bilbao, scoring 300 goals in all competitive matches for the club. Up to date, he’s still the highest goal scorer of Bilbao of all time. He was also a prolific goal scorer for the Spanish National team. He scored 20 goals in 20 appearances. Zarra will end his football career at Barakaldo in Spain. The former Spanish forward died in 2006 at the age of 85, he died of a heart attack.

Sanchez is widely regarded as one of the greatest Mexican footballers ever. He’s started his senior football career in UNAM, a Mexican football club, this was in 1976 and he’ll remain there until 1981.  And then he’ll join Spanish La Liga Side, Athletico Madrid where he’ll be for 7 years. He’ll later leave to join Real Madrid. It is while here (La Liga) that he’ll score the 234 La Liga goals. Sanchez will then go back to Mexico after Madrid, where he’ll end his soccer career. During his time of play, he’ll be known for his prolific goal scoring ability and his athleticism. 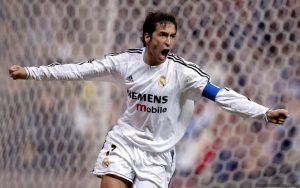 Raul Gonzalez is a retired Spanish footballer. He was the highest goal scorer of all time for Real Madrid, until the arrival of the goal machine that is Cristiano Ronaldo. He was at a time the youngest player to feature for Real Madrid’s senior team. And also he is the Madrid player with the highest appearance of all times, with over 700 appearances.  He wore the iconic number 7 at Madrid which C.Ronaldo now wears. This former striker was also the first player in the history of UEFA to score 50 Champions League goals. Raul Gonzalez is simply known as Raul across the football world. He started his football career with Real Madrid from 1994 until 2010. His remaining days of football he’ll share between Germany, Qatar and U.S.  Raul was a very prolific player, not only was he known for his excellent goal-scoring abilities, but also for his abilities to create chances for other teammates to score.

Stefano was Argentine by birth, but he played majorly for Spain throughout the time he spent in the La Liga. He’s widely regarded as a Real Madrid Legend, and he once held the record of being Real Madrid’s highest goal scorer and also had the highest number of appearances. At the moment though, he’s in third place with Raul and C.Ronaldo ahead of him. His other record which has also been broken is having the highest number goals in the European Cup. Stefano joined Real Madrid in 1953/1954 season and, he’ll remain there till 1963/1964. Playing in total 396 matches and scoring 308 goals. His last two seasons will be played in Espanyol until retirement from football. Stefano died at age 88 from a heart attack. He died accomplished, both as a footballer and a manager.

Cesar Rodriguez was a Spanish Footballer; he died in 1995 at the age of 74.  Cesar started his football career in Barcelona and that is where he’ll play the majority of his football. In the 16 years he played for Barcelona he scored 190 goals in 287 appearances, this is excluding his loan spells at Granada and Espana industrial. The Spanish forward will play for 3 other clubs after leaving Barcelona but never leaving Spain. Cesar Rodriguez will retire from active football playing having scored 315 goals in 501 matches in all club competition.

Quini is 7th on our list of La Liga top scorers of all times. He was born Enrique Castro Gonzalez in 1949, somewhere in Spain and died just last month on February 27, 2018. Quini started playing professionally in Ensidesa, and then he moved to Sportin Gijon where he’ll spend most of his football years. When Sportin Gijon was relegated he signed with Barcelona and played there for 4 years from 80’-84’. This is where he’ll retire, before then coming out of retirement to play for Gijon again. Quini went to two world cups for Spain and was regarded as one of the best strikers in Spain at that time.

Pahnio was born in Spain and was a very prolific forward, playing for some Spain’s top club sides. He never got to play more than seven 4 for the Spanish National team though. It was rumoured that he once disrespected a very influential person in Spain, therefore as a punishment he was very rarely called to the national team. He started his senior football career in Celta, he was there for 5 years before joining Real Madrid, where he was top scorer in the league for one season.  Manuel Fernadez Fernandez was known for his powerful shots, his strength and stamina. Having spent all his years in Spanish League, he’ll have scored 269 goals in 363 appearances at the time of his retirement. 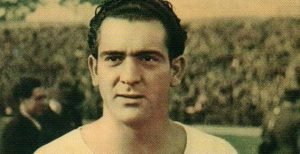 Edmundo “Mundo” Suarez was a Spanish forward par excellence, he was born over a hundred year ago somewhere in Spain. This Valencia legend was a striker and very notable for using his strength to his advantage in front of goal. This saw him win the Pichichi award (La Liga award for the highest goal scorer in a season) twice in Valencia CF. Mundo played for 11 years in Valencia and became the highest goal scorer of all time for Valencia, this is a record which is yet to be beaten. At the moment though, he’s the tenth highest goal scorer ever to have graced the Spanish La Liga. He spent his last active football season in Alcoyano and then retired to become a football coach.