Nigerian actor, Blossom Chukwujekwu shares a post with a confusing caption after reports that he moved out of his matrimonial home.

It was earlier reported that the actor moved out from his matrimonial home, blocked his wife Maureen Esisi on all social media platforms and told her parents he’s no longer interested in the marriage.

Although, there were rumors that he impregnated someone and Lilian Esoro somehow entered the situation.

However, the actress debunked all rumors that she’s pregnant for the actor.

Amidst the reports, the actor shared a picture of himself on Instagram and captioned it, “I AM“. 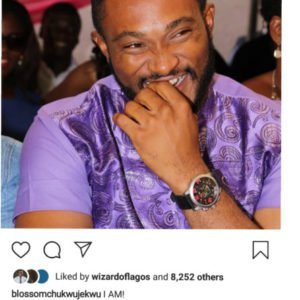 This is the first statement he would make since the reports of the breakup. Maureen Esisi on the other hand is yet to make a statement.

Many celebrities including Uti Nwachukwu, Emmanuel Ikubese, Ali Nuhu all flooded his comment section with emojis to show support.

Lilian Esoro Reacts To Rumours She Is Pregnant For Actor, Blossom Chukwujekwu