Earlier today, AIT posted on their Facebook page that the cross dresser allegedly got into an accident on her way to a party and passed away. They also claimed her friend, Tonto Dikeh was there at the clinic and she allegedly confirmed the news.

The cross dresser has now shut down the news.

“Anybody wishing me dead will die before me, I will slay in all Black to your burial.” 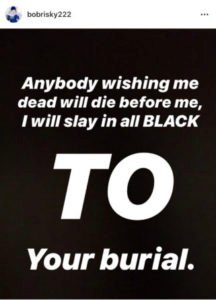 Also in the news is Dakore Egbuson who also debunked the rumours that her marriage to Olumide Akande has crashed.

Read More>>> Dakore Refutes Claims That Her Marriage Has Crashed

In another news, Adekunle Gold sends a heartfelt message to his wife, Simi as they marked their first wedding anniversary.