Nigerians have reacted after a news posted by AIT on Facebook says that Nigerian cross dresser, Bobrisky is allegedly dead.

According to the news, she reportedly got into an accident on her way to a party. They also wrote that celebrities like Tonto Dikeh were at the clinic and ‘in tears’. 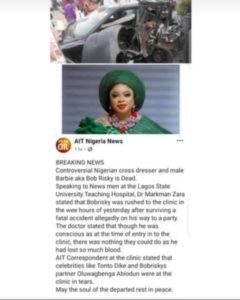 However, shortly after the news surfaced, the cross dresser has posted a picture showing the dress she wore to a party last night.

Her friend, Tonto Dikeh has also made a post on Instastory after the news and many have concluded that it’s fake news.

See Some Reactions Below:

Ahhh is AIT fooling with us or what? Bobrisky dead? He just posted on his IG na

That Bobrisky’s news has to be fake.

AIT said Bobrisky is dead but man posted on his ig page 38 mins ago.

What if it’s the kidnapper/criminal called “Bobrisky” that Gov. Wike place a N30m bounty on his head that is dead and AIT mistook him for the female Bobrisky. ??‍♂️

– bobrisky isn't dead. i reject it for her.

Omojuwa Reacts To The Ban Of “Sugar Rush” Movie

Lady Accuses Popular Abuja Pastor of Asking Her for S-x, To pee On Him For N300k