Lagos hotelier and interior decorator, Ehi Ogbebor reacts after a troll said her got married twice and failed twice.

This started after she posted that most house helps in Nigeria are ungrateful and annoying. 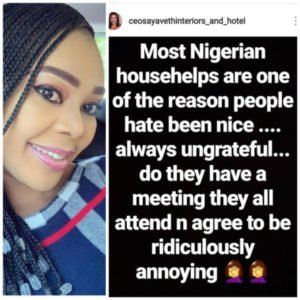 In response, a man identified as @Johnandrews1bb on Instagram commented, “You are wrong. Just like there are good people and bad people there are also wonderful house helps and bad ones. You talks too much and lacks humility. This is why you married twice and failed twice.”

Ehi Ogbebor soon made a video addressing the comment. She mentioned that yes her marriage failed twice but she didn’t fail twice. The entrepreneur didn’t fail to mention the fact that when marriages break out, women are blamed regardless of the party at fault.

BBNaija: Viewers React as Frodd Pulls Down Underpants While In Bed With Esther (Video)

Toyin Abraham is Engaged, Not Married Yet – Manager