Shortly after he was released on bail, Mompha reappeared on Instagram singing along to a Naira Marley’s song as he declared he’s not a yahoo boy. 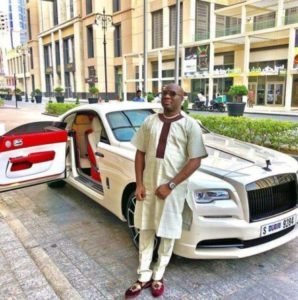 Mompha was arrested by EFCC for alleged fraud in October. He was also charged with 14 different counts of money laundering and internet fraud. However, after his court hearing, he was granted a bail of N100 million naira and other sureties which he soon fulfilled.

Celebrating his freedom, the Dubai-based big boy came on Instagram live dancing excitedly to Naira Marley’s song, ‘Mafo’. Singing along to his lyrics, Mompha emphasized that he’s not a Yahoo boy.

“Mompha welcome home. Now you have to know d people who truly love you. I’m already seeing some snitch Bastard message, saying…they are happy. I fear human being”, she wrote. After Years Of Marriage To A Nigerian, Man Expresses Annoyance Over His Inability To Become A Citizen

Alleged Extortion: You Have A Case to Answer, EFCC Tells Shehu Sani