It’s Day 4 of the transfer window and clubs and president are not relaxing on the pursuit of their signings. One of which are Barcelona and Arsenal looking to sign Rabiot and Pepe respectively.

Barcelona in talks with Adrien Rabiot 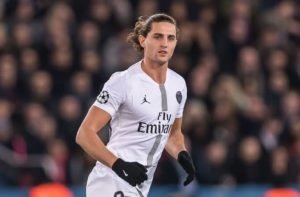 Reports have emerged that Barcelona are in talks with PSG for player, Adrien Rabiot. It is common knowledge that the creative midfielder has been left disgruntled at the French capital. The player will therefore be potentially available for a free transfer this summer. The French giants are consequently willing to release him for a cut price this January. To this effect, The Blaugrana have tabled a bid in the region of £49.2m according to a post by BleacherReport. The Catalan giants who remain frontrunners for this transfer would however have to see off competition from the likes of Tottenham and Juventus who have also shown interest in the 23year old.

Although, Barcelona had previously denied claims of breaching transfer rules by agreeing personal terms with the player before the open of the January transfer window. Even so, they are now officially in talks with the club and player.

This wouldn’t come as a surprise as the La Liga leaders are looking to bolster attacking options and would be looking at players with long term prospects for that. This is following the signing of youngsters- Lenglet, Dembele, Coutinho and Malcom in recent months.

What this deal could mean? We may be looking at a new Xavi and Iniesta in a pairing of Arthur Melo and Rabiot. Passing and positional awareness are attributes of Rabiot’s game and fit well into Barca’s playing philosophy. It is however difficult to see how he could be played alongside Ivan Rakitic and Sergio Busquets all at the same time. Nevertheless, he would bring a sort of dynamism to the midfield which already has a Vidal sort of midfielder. On the back of anticipated departure of Aaron Ramsey and long-term injury to Danny Welbeck, Arsenal must get players signed. Consequently, the Gunners have looked in the direction of Nicolas Pepe after attempts to sign Under fell through. According to a report by Italian outlet, Tutto Mercato Web, Arsenal have tabled a bid similar to the €55 million offered for Roma Forward, Cengiz Under. The report claims that Emery is interested in the Ivorian forward used to playing in a wide-man role. This is plausible considering the fact that Emery is in search for a left wing back/winger.

If this were true however, the North London Club would have to shell out €80m to sign the Lille man says Skysports. They would therefore need to see off some players to finance this transaction.

What this deal could mean? January transfer window isn’t a good time to sign players is a common statement among many football fans. However, Remember Aubameyang? He was signed in January. Arsenal have enjoyed their fair share of positive signings and won’t deter in making a signing this January. According to whoscored, the Lille man has won possession in the attacking third 18times this season more than any other player in the French top flight. Added to this is that he has already scored 12 goals this term, joint-top with Kylian Mbappe. An attacking player with a strong recovery is a good option for Arsenal.