The actress shared a picture of her baby bump on Instagram as she announced she’s pregnant. 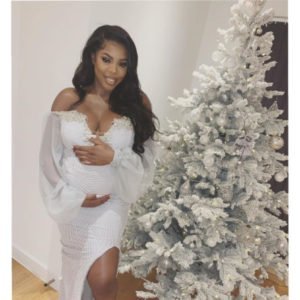 “Me & daddy can’t wait to meet our beautiful baby ?,” she wrote.

Many fans and celebrities have congratulated the actress over the great news.

However, some Nigerians have acted in shock as the vlogger is know for her comedy videos advising women to stay away from men who don’t treat them well or treat them like trash.

See some reactions to the news about her pregnancy below;

So Grace Ajilore “men are trashed” us to death on the TL only to end up a baby mama for a MAN??? ??

Grace Ajilore specifically said don’t be with a man who does not care about you. Fling him in the bin specifically. https://t.co/mmjU6Onz9V

Grace Ajilore didn’t sha say men are scum. She said do not be with men who treat you like trash, who don’t care about you and who don’t treat you right.
Y’all carried it as men are scum because that’s how plenty of you are or that’s how the men in your life are.

Grace Ajilore too is pregnant???
I thought she's a virgin.
Team No Penis needs to explain whats going on in their camp.

Grace Ajilore didn't say don't fall in love or whatever
She said "know who u're giving ur time to, don't settle, place value on urself & set standards."
She talks about her man in her vlogs.I don't know what all this ruckus is about now that she's pregnant.
Must one marry to….

Grace Ajilore was dropping "Men are scum" bants & jokes so I dont get the fuss about her getting Pregnant. Some of us drop "NG Women are Frauds" bants but we know we cant do without Nigerian Women. The Game is the Game ?‍♂️

ok i just went through grace ajilore's page nd is it that some girls are allergic to being given good advise? she didnt even ask u guys to be foolish na..Example of what she tweeted to someone,i think she is just telling yall to be with men that treat u right pic.twitter.com/yr9C0IeES2

I hate it that people are misunderstanding what Grace Ajilore said said in her video.

It’s clear she said Don’t fall in love with men that treat you like trash. And she’s very correct for saying that but I understand that Agenda must Agendeth but let’s not be bitter this way.

I wonder what feminists will do with their life now that their bosses have failed them. ?

Grace Ajilore is evidence that:
1. Nigerians will take your healthy relationship advice and translate it all to "men are scum activist" sha.
2. You can point out the flaws in a man's behaviour and still….. fuck him.
3. Feminists never promised you celibacy. Feminism=Equality

Also in the news is the reaction to the release of a show by Netflix depicting Jesus as gay. This has caused a lot of outrage online and many including Apostle Suleman has called for the boycott of Netflix.