Cool FM OAP, Dotun addresses Daddy Freeze in his new post over his comment on the Dakolo-Fatoyinbo case.

According to Daddy Freeze, Busola’s story doesn’t add up and he stated that rape victims shouldn’t speak up if they don’t have a ‘good story’.

‘I have 3 sons, I don’t want them in jail because a woman has a story,’ he said.

In response to his comments, Dotun wrote that he prays his girls don’t go through rape or molestation.

He also questioned if the media personality’s take on this issue has to do with his personal issue with Timi Dakolo.

He concluded that his opinions were not objective and came from a place of hate. 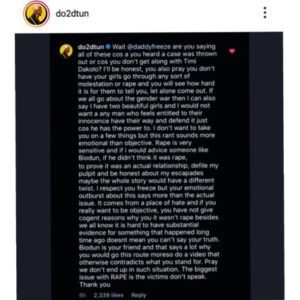