Nigerian comedian and actress, Etinosa was seen using a Bible as an ashtray as she smoked on her Instagram live video.

That was after the actress posted that the Bible verse, “Proverbs 22:6″ is a scam. She also wrote that her mother has been training her and she has been departing from the training contrary to what the verse stated.

“Proverbs 22:6 says train up a child when he is young and when he is old, he will not depart from it. Nobody can blame my mother she trained and trained and still training. And I am still departing. Prov 22:6 is a scam.” she wrote on her Instastory.

Shortly after that, she was seen on her live video smoking and using the Bible as an ash tray. 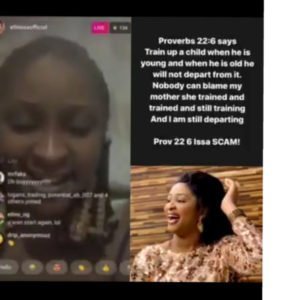 Months After Their Big Fight, Ubi Franklin And Iyanya Reconciles