Nigerian business man, Ubi Franklin called out Alex Ekubo after the former advised his followers to avoid getting confused and delusional by motivational speakers and the latter accused him of being one. 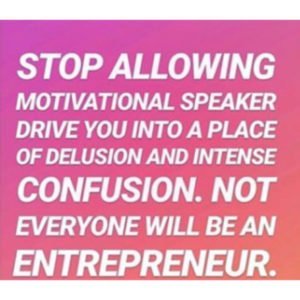 “Ubi na you gon gon be the pilot of the flight, awon inspire to desire, to perspire,” Alex Ekubo replied on the comment section but soon deleted it.

Ubi Franklin obviously wasn’t having this as he called out the actor asking him to read “carefully next time before he comments”.

He explained that entrepreneurship isn’t for everyone and living other people’s dream life is problematic hence the need to filter what motivational speakers say on entrepreneurship. 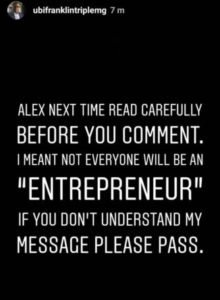 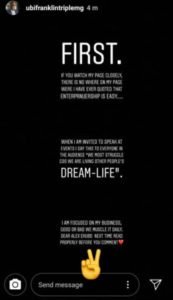 Female Corps Member Narrates Her Experience With A Pervert In Onitsha