– Veteran Nollywood actress, Sola Sobowale has shared a new picture of herself rocking a military ware in a new movie

Nollywood actress, Sola Sobowale happens to be one the most respected actress in the movie industry owing to her versatility.

She is undoubtedly one of Nigeria’s best actresses, who have set a mark for themselves through her remarkable acting career, which has spanned over a decade.

Sola Sobowale started her career in the Yoruba speaking sector of Nollywood, but she has gone ahead to conquer the whole of Nollywood with her charming personality and her acting skills.

She is well known for her hot temper and noise in movies.

Well, the actress in a latest post via Instagram handle decided to teased her fans with her new movie titled “Pillars of Africa”, by sharing a picture of her really fierce while in a military costume. She captioned it: “Breezing through �
Still on #PillarsOfAfricaTheMovie
Starring:
@chidimokeme
@hakeemkaekazim
@samdedesdx
@solasobowale
@ianwordi
@realzackorji
@the.segunarinze
@scottipipi” 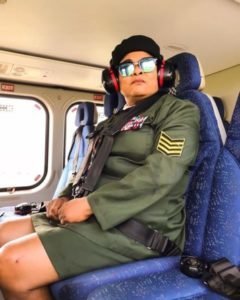