It’s been an epic 10 days for football fans, and sport fans in general. From Tiger Woods’ glorious comeback to Ajax taking us back to 1995, it has been a rollercoaster for most of us. The Man City-Tottenham rivalry will soon be a thing after what we’ve seen in the clashes between them. Title wins were confirmed in France and Italy, where Cristiano became the first player to win league titles in England, Spain and Italy. Damn…and we’re still arguing who the G.O.A.T is? Really?. Anyway, there were other things that crossed my mind as the long Easter weekend wore on.

Newcastle, Without Benitez, Are a Championship Side: I honestly don’t know the trick he’s using to get wins out of this team. He’s managed to actually keep them in this league with the likes of Hayden, Diame, and Dummet. The names I just called are nowhere near quality and to think that their main goal threats switches every week (you never know who can turn up) must be worrying for any fan. Can’t imagine watching a team with that much unpredictability. But that’s how you know that the manager is a huge factor. He doesn’t work with much but he grinds out results. If Newcastle don’t keep him beyond this summer, it is guaranteed that they will go down.

Lille Should Really Kick On Next Season: They have pushed PSG all the way for most of this season and while they were never going to win the league this year, they showed that they are better than the rest in the league. It is a team that has been rebuilding since their last league title win in 2011. It is a good team they have. The likes of Marseille and Lyon have been disappointing this season with their more expensive squads but Lille have been brilliant with theirs. A good example would be the recent stunning 5-1 win over eventual champions PSG. If they can keep their best players (especially Pepe), then they have a chance to really push on. They should. The French Ligue 1 will always give you an opportunity. Just ask Monaco.

Liverpool Should Just Focus On Winning The League: The look on Wijnaldum’s face said it all, Once he opened the scoring against Cardiff, he expressed the emotions of every Liverpool fan at that moment. Pure elation followed after the final whistle was blown. Listen…Liverpool should forget about that Champions League tie against Barcelona. The Spanish side have their own league wrapped up, more or less, and they are looking at their best ever opportunity to win the Champions’ League. Not only does that trophy add to their massive collection, they get to stick it to Real Madrid by winning it. Their motivation could not be higher. Liverpool, on the other hand, have a glorious opportunity to win a league title…for the 1st time in ALMOST 30 YEARS. Gaddamn! City have United to play and we know how United can up their game for City. This is Liverpool’s golden window. Tell Origi and Sturridge to face Pique please. 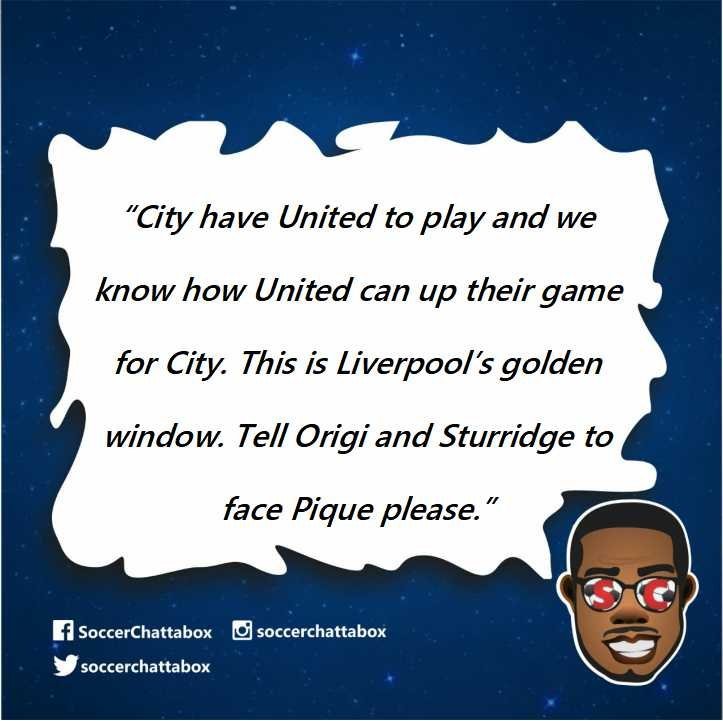 Neither Arsenal Nor Man United Are Good Enough For The Champions’ League: Don’t get me wrong…I want Arsenal to win the Europa League and I also want them to make into the Champions League this season. But after watching them play SO BADLY against CRYSTAL PALACE, I’m certain the team will get crushed if it enters the Champions League. The players are not good enough. Emery needs to do more work and get some new good players to achieve his objectives. For all the talk of work being done on the training ground, it’s clear that some players are simply not responding…and they need to go. Elneny, Jenkinson, and that German punk (you know the one) are going to be the death of most of us and they have to go. The same issue reigns at Old Trafford where Man United have struggled to put a side capable of not conceding stupid goals. The whole defense is a mess. I stand by my notion that PSG screwed up badly. They made the world think that Man United are ACTUALLY good. There’s no way you should be doing well with Smalling and Ashley Young (oh my God) in your defense. The likes of Damian, Rojo, Smalling and Young have to go with defensive reinforcements brought in ASAP. Further up, there has to be a back up for the midfield and attacking positions. You can’t rest your hopes on Pogba and Rashford…you need more. If this is not addressed, we won’t be singing ‘Ole At The Wheel’ ever again.

The Bayern-Dortmund Race Is Taking Longer Than I Imagined It Would: Just a point separates Bayern Munich from 2nd-place Borrussia Dortmund in the Bundesliga race. I thought the Bavarians would be way ahead by now, with Dortmund falling out of the race weeks ago. But it is still on…and could go down to the wire. I reckon that Favre will become the Manager of the Century if he pulls off a title win. He already deserves it for putting together the team he has. And the work he has done with Sancho? It’s almost like what Guardiola has done with Sterling. I’m serious. The boy is really good, and he gets better every week. He even brought Alcacer back from the dead to become the goalscorer he was before that dreadful move to Barcelona. Guerreiro, Achraf, Dahoud and Weigl are some of the other young talents pushing the mighty Bayern all the way. I actually like this. We probably know how this ends…but let’s see.

In other news, I am seriously rooting for a Burnley win tonight. I’m ashamed of Arsenal losing but I will never be ashamed of supporting Chelsea to lose. It will give me my best Easter feeling since I watched Walcott place that ball past De Gea for 4 (so beautiful).

Chris Smalling Says Messi Has A Weakness Only He Knows About