Nollywood actress and diva, Chioma Akpotha, has organized a Master Class under the umbrella of ‘The Oma World Company’, a class she claims would help push would-be actors and actresses to a whole new level and promote their career pursuit.

Chioma announced this via her Instagram page @chiomaakpotha. She promises that the 3-day intensive training master classes to be held in Enugu and Asaba would improve the applicant’s acting skills because they would be learning from the very best in the movies business.

She further adds that the classes are a platform for students as they could go on to showcase their newly acquired set skill on subsequent OMA World Company movies and TV Series.

“Masterclass with Chioma is the platform where people who aspire to be actors along with those who already are, get the opportunity to learn from the best and also get the chance to showcase their newly acquired skillsets when they feature in the OMA World Company’s films and TV Series”, she said.

Although, the training goes for the original sum of 105,000 naira, it would be subsidized for as little as 84,000 naira, if the following coupons are used wrote. 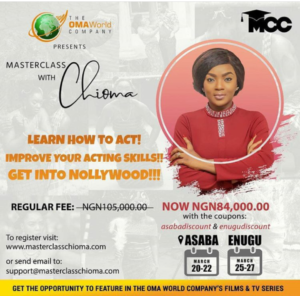 Recall that Chioma Akpotha last year in an exclusive with The Guardian said it was her wish to see more music artistes on the Nollywood front.

This was coming after the actress featured in ‘Lara and the beat’ with Seyi Shay and Rapper Vector.

Although, she mentioned that she was willing to give musical training a try. The silverscreen hunk has opted to train others in movies rather than in music.

3 thoughts on “Chioma Akpotha To Train Intending Actors And Actresses”