Actress Etinosa demands for Quran days after she posted a video of her using the Bible as an ashtray.

Some days ago, the actress on her live video posted herself using a Bible as an ashtray as she smoked. This was after she ruled Proverbs 22:6 a scam.

Afterwards, a man dared her to use the Quran like she did the Bible and she responded; “Give me a Quran and I will mess it up in two seconds. Who the f-ck do you think you are to threaten me with a textbook named a Quran or Bible? Are you mad? Are you a bastard?” 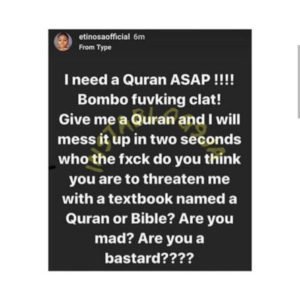 She later wrote that she needs to be paid to use the Quran because she can’t “be giving you guys free show. Pay me and I will do it. 2 seconds.” 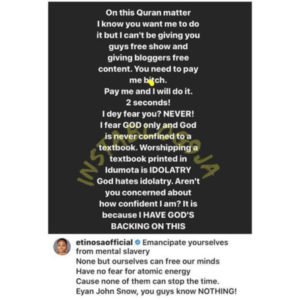 Sen. Dino Melaye says he respects and obeys the Bible than the Nigerian constitution