He took pictures of the 3 large potholes with the drinks he bought and captioned a message directed to the Lagos State Government in the hope that it will get to them after several retweets.

“Please join me in celebrating the life of these 3 wonderful pot holes in front of Zenith Bank, Kudirat Abiola Way, Alausa, Ikeja. They keep getting bigger and deeper everyday. Pls RT until @jidesanwoolu sees this,” He tweeted. 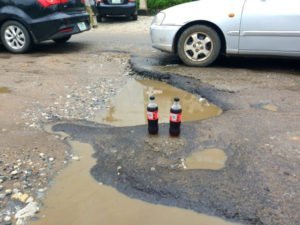 This isn’t the first time social media is used to call Government to attention. Some months ago, Nigerian rapper, Dremo called out the Government over a track that was slacked on the road. In few days, the Government responded and fixed the track.

They Are Human Beings! – Toni Tones Demands Equality For Transgenders

Lady Arrested After Conniving With Boyfriend To Fake Her Kidnap

Lady Allegedly Kills Herself and Daughter To Spite Husband