A troll got a hilarious reaction from Annie Idibia after insinuating that she wasn’t modest in her dressing.

This happened in the comment section og a post the mother of 2 uploaded. He also added that women will bring rape cases up whilst tempting men.

The troll commented, “tomorrow now, they’ll bring up rape case up. You people should continue tempting men. Your husband won’t see this to control you now before you guys will start carrying placards. Mtcheww.”

Read: Nigerian Singer Heartbroken on Finding Out His Girlfriend Isn’t Carrying Their Child

In reply, Annie Idibia dropped laughing emojis as seen below. 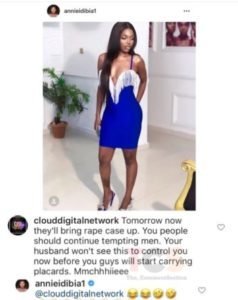 This is coming after Pastor Biodun Fatoyinbo was accused of rape by Busola Dakolo and sexual harassment/ molestation by several other women.

This allegations prompted several men and women to protest on Sunday at COZA demanding justice for the alleged victims.

Later today, the pastor in question announced his decision to step down until the issue is cleared.

There are 113 new cases of COVID-19 in Nigeria. This was according to the data released by the Nigeria Centre