The people of rivers state are so blessed with various colorful tribes that you will be shocked that they even exist. These tribes most times are generally referred to as the Igbo tribes or Ijaw tribes and so on but the case is different when you read through this article because we took our time to make sure that we differentiate which is which make sure you learn something new today.  So have a good read about this culture and tribes in rivers state making it one of the most colorful tribes in Nigeria. 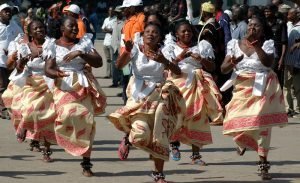 The Kula people are found in Akuku Toru local government área of Rivers state. The kula people speak a language called kalabari. Not much is known about the history of this people. However, they share a lot with the Ijaw people.

The Kula people are predominantly farmers and fishermen. Also, Christianity, as well as their traditional religion, is practiced by this people. Kula men tie wrappers on singlet with hats to match while their women tie wrappers on blouses

Some historians have asserted that the Ikwerre people are not related to the Igbos but migrated from part of Benin.

Farming, fishing and hunting are the major occupations of this people. Also, Christianity is widely practiced. 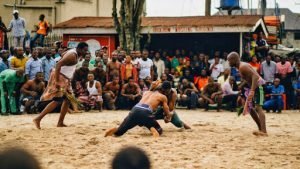 The Ibani tribe is one of the tribes of the Ijaw nation. The Ibani people occupy Bonny Island and have always had interactions with Europeans for many years. The people of Bonny are traders and practice Christianity.

Alcohol is a generally accepted drink in this tribe. Also, the Ibani people feed on plantain and fish as a major meal and are mainly farmers and fishermen. Men from Ibani tie wrapper on singlets and put on hats while the women tie wrapper on a blouse.

Present day members of the Abua tribe are Christians and engage in the production of palm oil. Men and women from Abua tie wrapper. While the men put on singlets to complete their dressing, the women put on blouses.

The people of the Boma tribe are fishermen and are known to feed on meals of fish and plantain. They are predominantly Christians and are known to dress like other tribes in the Ijaw nation.

The Degema tribe occupies Degema Island in Degema local government área in Rivers. There are about 10,000 members of this tribe. The degema people are predominantly Christians. As a result of the fact that they are surrounded by water, the Degema tribe practices fishing on a major scale.

Men and women from Degema are known to tie wrappers. While the men put on singlets, the women put on a blouse.

The Nkoro tribe is a very small tribe. It is a subtribe form the Ijaw nation. Areas occupied by the Nkoro tribe include Dema, Ayama, and Nkoro. The people of Nkoro speak an Ijaw dialect with some traces of Igbo. According to history, the Nkoro people migrated from Okirika town. The Nkoro people do not all speak the same language. A section of the Nkoro tribe speaks a language that is absolutely different from the rest of the tribe.

As a result of the geographical closeness of Nkoro and Ogoni, the Nkoro have been influenced culturally and have adopted some Ogoni cultures.

The Nkoro tribe is a predominantly Christian tribe and fishing is the main occupation of this tribe.

The Ekpeye tribe is a tribe that occupies the Ahoada and Ogba-Egbema parts of Rivers state. They are very similar to the Igbos and speak a language that appears to share vocabulary with the Igbo language. The people of Ekpeye are predominantly Christians and have farming as their occupation.

Opobo is a tribe as well as a city in Rivers state. Four towns make up the Opobo tribe. They are; Queenstown, Epemlomma, Kalaibiama and opobo town. The existence of this tribe dates back to 1870.

The Opobo people are fishermen and farmers. They are predominantly Christians and dress like most other tribes in riverine areas.

The Ogoni people are a major tribe in Rivers state. This tribe became popular after the execution of Ken Saro Wiwa and his Kinsmen.

The people of Ogoni have lots of oil-related problems. Ranging from oil spillage to destroyed farmlands and fishing areas. Ogoni people number about 1.5 million and live in a 1,050 km square area that is known as Ogoni land. These people share the same customs with their neighbors and have fishing and farming.

Fishing, as well as farming, are the two major occupations that are practiced by the predominantly Christian people of Nkoroo.

The Eleme people live in Eleme local government area. This tribe is located about 20km from Port Harcourt. Eleme is surrounded by oyigbo and Obio agbor to the north, Ogu Bolo and Okrika to the south and Port Harcourt to the east.

Indigenes of Eleme are fishermen and traders. Christianity is the major religion of people of this tribe while a meal of fish and plantain is a common food eaten by the Eleme people.

The Egeni people are fishermen and predominantly Christians. Like most other tribes in Rivers state, they feed on fish and plantain.

Etche doubles as a tribe and a local government area in Rivers state. The etche people speak a language that is believed to be a dialect of the Igbo language. The people of Etche have more in common with the Igbo tribe than they do with other tribes in rivers state.

The Etche people are farmers and also practice Christianity. Although they dress like the Igbos, they still eat food common to other rivers state tribes.

The Ijaw tribe is the biggest tribe in the riverine part of Nigeria. They are found at the coastline of Nigeria. These people are very influential and also have a violent history. The average Ijaw man is considered a good swimmer. This is because of their close proximity to water.

The Ijaw people are Christians and are majorly fishermen. They love alcohol and also a meal of fish and plantain. The dress style of this tribe includes wrappers and heavy cloaks with hats to match.

Even though these tribes share the same state, they have various cultures in respect to their dressings, cooking, religion etc.  These tribes are what makes rivers state what it is today and the rich culture belongs to the various tribes found there. It is important one knows his/her tribe very well rather than just identifying with the state alone. Know the background of your culture because that is what makes your whole entity.

Eniola Badmus Trapped in London, Fears For Her Life Because Of Coronavirus (Video)

2 thoughts on “List of Tribes in Rivers State Nigeria”