The show will hold live in five cities: Nottingham, Belgium, London, Birmingham and Manchester; and is held in conjunction with Biron’s World Entertainment and Pingexpress. Tickets are available for sale @ www.cokobar.com.

The venues and date for the show is listed thus: 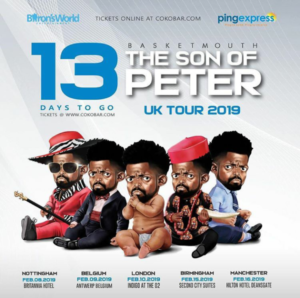 Basketmouth’s last comedy show in the UK was as far back as Valentine’s day in 2017 with the Lord of the Ribs show selling out at the SSE Arena, Wembley.

His stand-up shows which centres around African life and Nigerian politics in general has endeared him to many with the comedian set to release new movie, Exorcism of Alu.

For his brilliance on the comedy scene the comedian won the National Comedy Award for Best Stand-up Comedian of the Year in the years 2005 and 2006.

He is considered one of the best comedians in Nigeria at the moment with his most recent awards coming in 2017 where he won an award at the Savannah Comic Choice Awards.

The comedian graduated from the University of Benin, Edo State with a degree in Anthripology and Sociology. Bright Okpocha started drumming in 1991 before following it up with rap three years later. He later formed a 7-member rapping group called Da Psycopaths before breaking up in 1995.

Basketmouth was born in the month of September, 1978 in Lagos State and has organized several concerts such as the Basketmouth Uncensored and Lord of the Ribs.

Son of Peter was designed in a bid to make his tour shows more intimate.