The lawmaker who represents Surulere constituency in the Lagos State Assembly, had disclosed that the structures intended to encourage people wash their hands were sited at different areas including; Olodeokuta, Ojuelegba, Love Garden, Adelabu, Bode Thomas and Ishaga Road.

However, many have blasted the politician over the idea and for customizing the hand washing materials with his pictures.

So I came across this Embarassment on Desmond Elliot’s page. What tf is this? An upgrade to the toilet?

He even had the guts to put his Face there as per Philanthropist. I want to fight! pic.twitter.com/7Hv27j4P3P

Desmond Elliot has however defended the project. He said that he did the what he felt was right and was only test-running the project to see if it was going to work.

“Normally. I will just let things pass but this has to do with life and death owing to the COVID-19 that we know about. I think responding will be very apt and quite germane.


“I just got couple of people who sent messages to me  showing me the backlash and stuff going on concerning the buckets (he shared).

“There was not even one (comment) in the whole social media space that has said, ‘Look at how you can do this.’ There is a lot of negativity out there and I wonder why.” 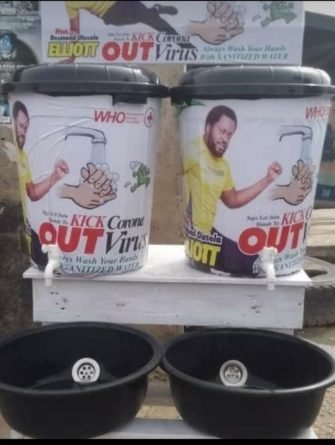 On customising the hand washing materials with his picture, he said;

“If you read my post, and I just remembered you guys on social media don’t read, I said makeshift. It was something I was gonna test-run and see if it was gonna work. To the world, it was not working, to the people, it was.


“What is it about my face being there? If I wanted to score points,  I would have put my face in the bags of garri and in every bag of rice.

“I am doing what I feel is right, I am doing it because I am here and you are there asking. What makes it bad that my face is there? Is it your face I would put?”

“If The Buhari Government Is Begging For Ventilators In Public, Imagine What They Beg For In Private” – Imam of Peace

One Dead As Billboard Falls In Aba, Abia State

‘Our Decision on School Shutdown Over COVID-19 Stands’, Says Ministry of Education